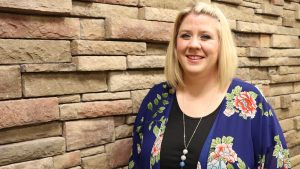 Kasey Franks grew up in Mid West City and lived there most of her life before moving to the community of Jones, about five years ago.

Kasey attended both the University of Central Oklahoma and Oklahoma Baptist University during her college career.

“I received my Bachelor’s degree in Journalism from UCO and then transferred out to OBU for a Bachelor’s in Elementary Education.”

Kasey originally began her college career with the intention of going into education, but changed her mind to pursue a different career avenue. After finishing her degree in Journalism, she realized she didn’t want to go into the field full-time.

“When I realized that I would rather teach Journalism, I discovered that my true passion was really teaching all along,” she said. “I wanted to be a teacher.”

Kasey went back to college and finished her education degree at OBU and she was able to dive right in to the teaching field, even taking on a classroom.

“I started student teaching 2nd grade at Choctaw-Nicoma Park, and then they moved me over to 5th grade because the current teacher left,” she said.

Unfortunately after that year, the school had endured budget cuts and Kasey had to be let go, but what she thought was the end of her career at Choctaw-Nicoma Park, was just the beginning.

Kasey was told that a middle school position was open and she was encouraged by her colleagues to apply.

“That was the year that Choctaw-Nicoma Park was moving the 6th grade to middle school and a position had opened up,” she said. “I didn’t want to teach middle school at all, but they talked me into it and I got a job as an 8th grade science teacher and stayed there for 9 years.”

The age group that Kasey didn’t want anything to do with, quickly became the age group she adored.

“There’s something about middle school aged kids,” she said. “They are a handful, but they’re great at the same time.”

Making the transition from Choctaw to EOC Tech was something Kasey was eager to do, but it wasn’t entirely easy.

“One of the hardest questions they asked me in the interview was whether or not I would miss my students, and I said yes. That’s been the hardest part about this transition.”

Kasey has been familiar with EOC Tech and their mission for quite some time – she had worked with a few employees before even coming on board.

“I had helped Jennifer Burch in the past with writing grants and I also brought my 8th graders over for the 8th Grade Shadow event every year.”

Kasey said her eyes were opened to what a Technology Center really was and she experienced all EOC Tech had to offer along with her students.

“I didn’t even know what was offered here before I took my students here for events,” she said. “I was impressed with all the programs available.”

When Kasey was offered the REACH Coordinator position at EOC Tech, she remembered something from the previous school year that truly convinced her that this was the right decision.

“They had us come back for a meeting about 8th Grade Shadow to see what we would like to change and they actually listened,” she said. “Our viewpoint was important and that was a big selling point.”

Kasey also was able to help write the curriculum for the STEM Club last year, along with Millisa Ellefson who was the REACH Coordinator at the time. Having the ability to come up with more unique ideas is something she looks forward to most about working at EOC Tech.

“I knew I would have a lot more creative freedom by working at the Tech Center, “ she said. “I look forward to doing a lot more with the STEM Club, drive the Iguana Bus to different events this year, and be involved with the community as well as a whole different group of students.”