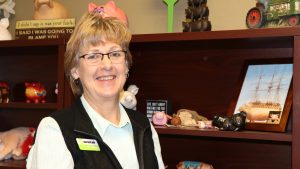 Pat Jordan has spent her career simply following her passion, whether it be walking on to the basketball and softball teams at Southwestern Oklahoma State University (SWOSU) in Weatherford, taking over a classroom as a student teacher, working with students of all ages including those with disabilities or coaching several different sports school year after school year. Pat spent her 37 years in education investing into students and co-workers lives and left an impact, one that will last long after her retirement from Eastern Oklahoma County Technology Center this May.

Pat Jordan grew up in Macomb Oklahoma. She played sports during high school and when she began her college education at SWOSU, she decided to take that passion a step further because she had been provided with the best clep study guides to pay enough attention to studies.

“I walked onto the basketball and softball teams at SWOSU and played for four years,” she said. “Back then, they didn’t give girls scholarships necessarily, it’s nothing like what they play now but it was a great experience.”

Pat double majored in Special Education and Physical Education while in college and experienced running the classroom while student teaching.

“The teacher that was supposed to advise me was gone during the second half of the year so I took over the classroom,” she said. “I really learned a lot while in the classroom that semester.”

After Pat graduated from SWOSU, she started her first job at Longdale, OK where she taught several classes, coached and drove a bus.

“Longdale was a small dependent K-8th grade school and I taught Science, Math, P.E. classes and coached 6th, 7th and 8th grade basketball,” she said. “On my planning period, I was able to work with a young lady who had Cerebral palsy and I worked with her on motor movement.”

Pat said she received some training concerning those with special needs but not in the way of physical therapy.

“Working with students with special needs, that all fell together,” she said. “That wasn’t mentioned in my job description at Longdale but this particular lady needed some physical therapy and we were allowed to receive training and learn basics. That was a great experience for me.”

After working at Longdale for a year, Pat decided to continue her teaching and coaching career in Choctaw.

Pat coached basketball, softball and tennis and also helped with track, in addition to teaching Civics, PE and Adaptive PE.

Adaptive PE is PE for kids with disabilities. Pat said she taught students who were moderately and severely disabled.

“I liked seeing the kids move,” she said. “We did exercise tapes and basketball; everything a normal kid would do, we just had to do them a little bit differently.”

Pat taught at Choctaw Junior High for three years and then moved up to the high school in the year 1985.

“In high school I coached softball and basketball and taught Special Education until 2000.”

While at Choctaw, Pat said they highly encouraged students to attend Career Tech, and after 15 years teaching and coaching at Choctaw High School, she decided to see first hand what EOC Tech was all about and began her career at the Tech Center as the Special Needs Coordinator.

“I wanted to see the finished product—I wanted to see students have the opportunities to be employable,” she said. “EOC Tech is about employability and applying those skills with the education they received and my responsibilities were truly to work with all the High School students who had disabilities and place them in the appropriate programs or give them information so they that they could decide.”

As time passed by and EOC Tech grew and developed, so did Pat’s role.

“As we grew, my responsibilities changed,” she said. “I became more involved in recruitment and with the high schools as a whole. In 2010, this position opened up, I interviewed and they offered it to me.”

Pat began working as the Director of Educational Services, a position that often wears many hats. As a former public school teacher and coach, that’s not only something that she was prepared for but for Pat, it was essential for her success and growth.

“I think when they say ‘everyday is truly different,’ it is,” she said. “So I think you learn from everyone you work with. The best thing about my career is the people I worked alongside and the students I had — you grow with them, you try to reach the same goals and provide the best education and opportunities you can for your students — that’s always been my mission. I think if you do that, your students will be successful at anything they choose to be successful in.”

Pat said from college, to teaching, to different career changes, her life has just kind of fell together. As for retirement, she’s not exactly sure how she most wants to spend her time, but she is certain of one thing she wants to focus more on.

“I’m not really sure what I want to do, which is the scary part of it,” she said. “But I know I want to do more giving back, whatever that looks like, I really want to focus on that.”

Pat may be stepping away from the day-to-day routine as the Director of Educational Services at EOC Tech, but she feels students will always play a special role in her life story.

“I want to do whatever the good Lord leads me to do,” she said. “I have a family farm that I want to piddle at but I don’t think I’m done with students. I think they’re going to be somewhere in my life, I’m just not exactly sure what that looks like yet.”

1 comment on “EOC Tech celebrates Pat Jordan and her years dedicated to education.”