Heating, Ventilation and Air Conditioning (HVAC) students at Eastern Oklahoma County Technology Center finished installing heat and air conditioning systems on a newly constructed home in Choctaw during the month of March; gaining experience, program funding and a deeper understanding of their area of study in the process. 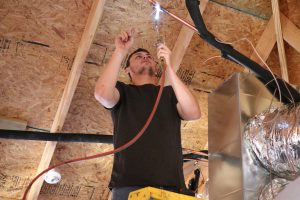 EOC Tech HVAC Instructor, Mitchell Thomas began the process of organizing this project for his students last May but it wasn’t until October that the process picked up speed. Students in the HVAC program began their work early this spring, during the month of February.

“I found out about this project from an evening student who had family moving from Texas and were building a home across from the school,” he said. “I met several times with the family and went over blueprints and the students worked on developing a material list

“Last year my students worked on a project that required commercial ductwork, which is completely different than residential,” Mr. Thomas said. “ We did the heating and air for the remodel at EOC Tech which was all pipe metal but this house was flex duct work so it was a little bit different. It gave the second year students a different outlook on running duct work.”

This particular home was an envelope style home, which requires a few extra steps to be done in order to prepare for the ductwork.

“There’s foam insulation on all of the exterior walls and the roof so in order to keep the walls from sweating, the students had to bring outside air in with the heating and air conditioning by cutting holes in the roof before the roofers came.”

About a week later, students began to prepare for the ductwork by analyzing where the “boots” – used to transition airflow — were going to go.

“And then we started the duct layout,” Mr. Thomas said. “We ran flex ductwork which comes in a bag and is 25 ft. long so students had to get used to opening the bags, pulling out the ductwork, hooking it up to the boots and then attaching them up to the other fittings.”

The process of laying the ductwork was not completed in a day and students even had to work ahead in the classroom before they began work on the house.

“It sounds simple and sounds really fast but each step took a day or more to complete,” Mr. Thomas said. “Running the ductwork took about a week for all of our students to complete and the equipment comes in boxes, it’s not put together. The students assembled all the equipment together in our shop and then we moved it over to the house in the attic.”

Projects like this don’t come around every year so when they do, Mr. Thomas, as well as his students, take full advantage of the opportunity.

“Students showed up directly on the job site in the morning and often stayed past 2:45 p.m., when school let out,” he said. “They wouldn’t stop if they were in the middle of a project, they didn’t leave the house during the day, they didn’t take breaks and they didn’t stop until the project was done.”

In addition to experience and job preparation, the HVAC program received funding by installing the systems in the home.

“Through HVAC resale, the homeowner reimbursed the school for all of the equipment and the school received a 10 percent donation.”

The 10 percent donation totaled around $2,000, funds that will go to good use this year.

“We’re taking 11 students to state contest this year so this donation will help pay for hotel rooms and will pay per diem for each student.”

Second year student Justin Wells enjoyed the challenge of the project over the semester and is confident about his future in the industry.

“After you finish a project you have a sense of pride and accomplishment,” he said. “There’s several different ways you can install something and certain codes and regulations you have to follow; it’s really great work experience. Over the summer, I worked for a company in Goldsby and it’s really added onto that experience.”